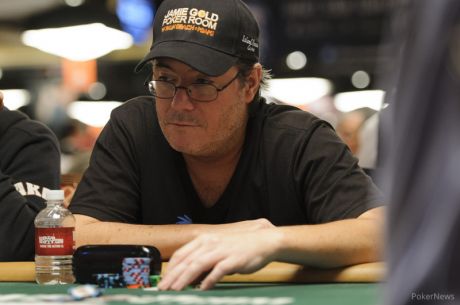 Nine years ago, Jamie Gold was on top of the poker world. Whether you were entertained or annoyed by his table-talking antics, there's no denying Gold's victory in the 2006 World Series of Poker Main Event was impressive. Not only did he hold onto the chip lead from Day 4 onward, he eliminated seven of his eight opponents at the final table, which included Paul Wasicka, Michael Binger, and Allen Cunningham.

Gold has returned to the Rio numerous times over the years, but his appearances at the WSOP are sporadic and commonly around the Main Event. Not in 2015. This year Gold arrived early to take part in a full schedule, or at least the busiest he's played in the better part of a decade.

"This is the first time doing a long run of tournaments," Gold told PokerNews. "I think I'm going to do 12 or 13 events. About a year ago I decided I wanted to start playing again. I took six months to train with people who I believe to be really talented, young players. The game changes all the time, so I wanted to make sure I could still compete. I ran pretty well after. I played six events, cashed in four, and made two final tables."

"I think maybe I can compete again," Gold said with a sly smile. "At the same time, we've been developing YouStake.com, the first fully-integrated sports-staking and sponsorship platform that allows the masses to invest in skilled players. We're allowing anyone in the world to invest in over 500 of the best players in the world."

YouStake, which launches June 1, seeks to create a fantasy sports experience between fans and poker players/celebrities, one that involves direct social interaction.

"There's a simple and secure marketplace now, and they do everything from collecting the entry fees, the registration of the event, the issuance of the tax documentation, and distribution of the winnings," said Gold. "We also have a celebrity area, and I'm sure you've heard about Jose Conseco [joining the site]. He's really excited. He's definitely going to be offering packages."

According to Gold, the baseball legend and long-time poker player is most excited about getting his large Twitter following involved.

"There are so many people who would love to say they have a piece of him," Gold explained. "It's a decent investment, but obviously a lot of people might say they'd rather invest in a professional poker player. However, fans of Jose would much rather invest in him or another celebrity."

For those interested in investing in more experienced players, Gold revealed that some of poker's best are slated to offer packages on YouStake including fellow WSOP Main Event winners Greg Raymer and Joe Cada, as well as reigning WPT Player of the Year Anthony Zinno, who actually invested in the company.

Those interested can invest as little as $20, and in exchange will receive personalized updates from players, who are allowed to create their own packages. Gold created his own package, and quickly sold out.

"One of the reasons I'm playing that many events is because I'm staked," Gold admitted. "On my own, I'd probably play half as many."

One of those events didn't appear to be the wildly popular The Colossus, which was happening all around him while he played cash.

"I think the people who run the WSOP are brilliant at what they do, not just for them, but for the players," said Gold. "I personally don't love the turbo short-stacked style of starting a tournament, but how else could they do it and be able to handle it?"

So how did Gold feel about The Colossus beating the record for most players in a live tournament, which was previously set in the event he had won (the 2006 WSOP Main Event attracted 8,773 players)?

Meanwhile, with so many players packed into the Rio, it seemed only a matter of time before fans inundated Gold.

"Definitely at the Rio during the World Series of Poker, but in life it's slowed down a bit," Gold replied when asked if fame still precedes him. "I still get stared at a lot, but people used to get really excited and want to be physical — you know touch you and get close — but now it's much more, 'oh hey, look.' It's a much easier fame. Life is good, I'm very lucky."