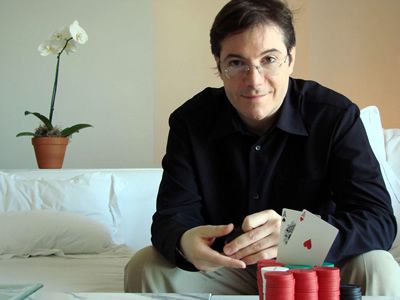 Jamie Gold has been called a lot of things since he won the 2006 World Series of Poker Main Event, but one name is finally starting to stick. Perhaps the most accurate nickname for this television-producer-turned-poker-pro is “The Philanthropist,” as he was dubbed by several pros and members of the media, thanks to his charitable endeavors.

Having attended more than thirty charity poker events since winning the title, Gold has side-stepped political controversies in the poker community to take a hands-on role in making a difference in the lives of others, and he couldn’t be happier doing it. “During my first year as champion, people asked me what happened and why I didn’t play a lot of tournaments. At the time, I was taking care of my family and I spent the year with them. It was the right thing to do. I was planning on playing as much poker as possible last year, but I realized that it was much more important for me to use my time and energy into charitable causes,” he said.

Inspired by pros like Barry Greenstein and Robert Williamson III, Gold has picked up the social gauntlet for the professional poker community and is taking the game’s charitable inclination to a whole new level. “I don’t think the world really understands that as a whole, poker players are unbelievably charitable. It is incredible. It is very difficult to find a poker pro who doesn’t give back, and that is unusual in today’s business world. I’m so impressed by that. I can’t remember that last time anyone has said ‘no’ to me when I called them to participate in an event.”

According to Gold, poker is a means to an end and the game can make a big difference in the lives of others. “It’s a great way to raise money. It is a very social thing and anyone can play the game. Not everyone can get out and play 18 holes of golf, but everyone can sit down and play poker. It is a great way to meet people and these events breed camaraderie. I’ve met so many great people sitting next to them at the table that I never would have met otherwise. Plus, no matter what your skill level, you still have a shot at winning the tournament. These events make people feel good when they know that they are making a difference and having fun doing it.”

Gold has championed a number of different causes since becoming one of poker’s most recognizable faces. “I am dedicated to helping fund research to find cures for multiple sclerosis, cancer, and diabetes, as well as working with programs that help further children’s educations. I’ve also done work for the Special Olympics, but the one that is closest to my heart are the ALS charities,” Gold said.

A shrewd businessman at the tables and away from them, Gold is selective about the causes he supports because he believes that the charity’s hard-earned money should be spent in the right fashion. “My favorite charities are the ones that actually make sure that the money is given to research and to the people who need it. There are a lot of charities that raise a lot of money to pay administrative costs. I just don’t think that is the way it should be done.”

In Gold’s mind, he is doing the most logical thing he can with his celebrity status – making a difference in the lives of others. He sincerely believes that he has a responsibility to use his notoriety wisely and it is a big motivating force in his life. “Knowing that what you are doing is leading to either a cure or support for people who desperately need it is huge. There are a lot of people who can’t help themselves, because they aren’t in a position to do it. The fact that my attendance or that of other poker pros at events can make a difference is very satisfying,” he said.

According to Gold, he has to act quickly if he wants to capitalize on his fame and leave his mark on the game. “Right now, I have a chance to make a difference as a celebrity and I need to take advantage of that. Some day, I may not be in the same position. I’m not really worried about my personal poker achievements. I’m worried about the game as a whole. We’re not just a bunch of degenerate gamblers and I think we need to show the world that.”

In addition to supporting a number of worthy causes, Gold is working on three new charity projects that will take up a lot of his time. “First, I am working with Annie Van Bebber and her group Poker Cares. I will be doing several public service announcements for them. Second, the charity that I am creating in my father’s name is finally becoming a reality. We’re going to raise as much money for ALS and for cancer research as possible. The third thing I am doing is writing a monthly column for BLUFF about the charities and events I get involved with. I am excited to be able to work with BLUFF to raise even more awareness for these worthy causes.”